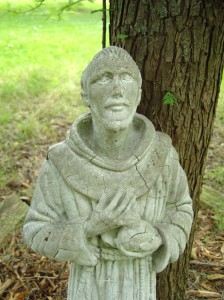 Respect for Life: The Foundation

The Catholic Church proclaims that human life is sacred. Our passion for peace is rooted in respect for life. The US Conference of Catholic Bishops summarizes the proud tradition of Catholic Social Teaching under seven themes. Life and Dignity of the Human Person is listed first, as the foundation of all succeeding principles and “the foundation of a moral vision for society.” Abortion, euthanasia, the death penalty, and war are cited together as violations of our God-given dignity.

In the 2006 US Catholic Catechism for Adults, the fifth commandment is given positive expression as Promote the Culture of Life. Chapter 28, which discusses that commandment, opens with The Dorothy Day Story. Day is one of four Americans who Pope Francis held up as models when he visited the US in 2015. He cited Lincoln as the exemplar for liberty, Martin Luther King, Jr for liberty in plurality and non-exclusion, Thomas Merton for the capacity for dialogue and openness to God, and Dorothy Day for social justice and the rights of persons. Currently a candidate for sainthood, she is one of the founders of Pax Christi USA.

The Catechism goes on to quote “Donum Vitae,” a 1987 Instruction from the Congregation for the Doctrine of the Faith.

Human life is sacred because from its beginning it involves the creative action of God and it remains forever in a special relationship with the Creator, who is its sole end. God alone is the Lord of life from its beginning until its end: no one can under any circumstance claim for himself the right directly to destroy an innocent human being.

Jesus commanded Peter to put away his sword (Matthew 26:52), and students of church history agree that the early church was opposed to war as well as abortion, infanticide, and other forms of killing. Later in the same chapter, however, the Catechism lists the four traditional “just war” criteria, which have been invoked by lay authorities as well as religious ones since the fifth century to justify a long and bloody succession of wars.

Since 1945, when the destructive power of nuclear weapons changed the nature of war forever, many have questioned how any modern conflict could meet those criteria. In the same decades the art and science of peacebuilding has grown and matured. Forceful nonviolent alternatives have been tested in challenging situations around the world and proven at least as successful as war in countering injustice. In Rome, in April, 2016, a historic Nonviolence and Just Peace Conference released “An Appeal to the Catholic Church to re-commit to the centrality of Gospel nonviolence.” The conference included lay people, theologians, members of religious congregations, priests, and bishops from Africa, the Americas, Asia, Europe, the Middle East, and Oceania.

“We believe that there is no ‘just war,’” the participants concluded. “We propose that the Catholic Church develop and consider shifting to a Just Peace approach based on Gospel nonviolence. A Just Peace approach offers a vision and an ethic to build peace as well as to prevent, defuse, and heal the damage of violent conflict. This ethic includes a commitment to human dignity and thriving relationships, with specific criteria, virtues, and practices to guide our actions. We recognize that peace requires justice and justice requires peacemaking.”

With Pax Christi International, one of the conveners of the 2016 conference; The Catholic Nonviolence Initiative, which is carrying its goals forward; Pax Christi USA, and other like-minded organizations, we collaborate to promote justice and peace. To answer our individual calls to personal transformation, we work together to build communities of Gospel nonviolence and further the reign of God, advocating and bearing witness to peaceful alternatives to war and all other forms of violence.